Video is the golden goose for the digital advertising industry. It's engaging, lucrative, and propels your customers across the marketing funnel in ways that display ads can only dream about.

Put another way, video reigns supreme over all other forms of content, and it’s essential that publishers treat video like the incredibly powerful asset it is. And Ad Lightning now offers a tool to make sure that happens.

Much of the ecosystem is still struggling to keep pace with an industry that's evolving at breakneck speeds. People don't consume media like they did just five years ago, with cord cutters rapidly becoming the norm rather than the outliers.

However, with so many different channels to consume that media – from YouTube and social media to the seemingly endless number of OTT providers like Netflix and Amazon Prime – a single poor UX is all it takes to send a viewer to a different rabbit hole.

Unfortunately, with video generating up to 10x or even 20x the CPMs of its display counterparts, those different rabbit holes – your video abandonment rate – are akin to gaping wounds in your revenue stream that are difficult, perhaps impossible, to heal.

Of course, there’s a relatively straightforward way to mitigate that lethal video abandonment – by delivering a sparkling UX that keeps eyeballs on your content and not someone else's. But with so many specs, formats, channels, and devices to cater to, that’s easier said than done. And that’s the sole premise behind Ad Lightning’s new video QA tool.

What if I told you that you can now check even a massive batch of video ad tags with absolute efficiency? Given the laborious, resource-tapping process that most publishers go through to QA video ads, that might seem like the most foreign of concepts right now.

Just think of your own video ad spec sheet for a moment. VAST, VPAID, aspect ratios, bitrates, frame rates, codecs, and many more – to the untrained eye, it probably looks like an undergrad statistics exam. In other words, there are many ways for a video to be out of spec and, especially for larger publishers, making sure your video ads are in compliance at every step is a monumental chore.

But Ad Lightning now gives publishers the ability to quickly understand if their video ads are complying to their public specs. 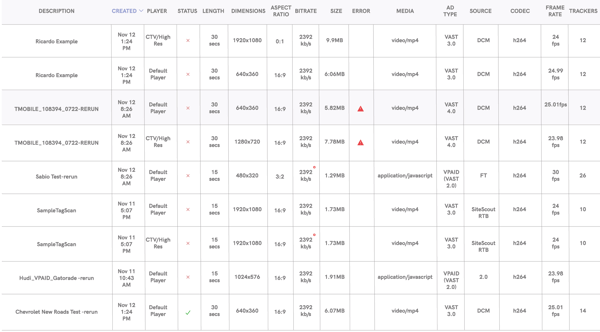 As you can see, Ad Lightning's video QA tool not only gives you a clear and informative view of your video ads that you can filter and categorize, but also tells you where they are out of spec. Further, if a tag passes compliance on one player but fails on another, we tell you exactly why. No more guessing games, hunting down subtle metrics or, even worse, running a video ad that's out of compliance and threatens the UX.

Customizable to Your Exact Specs

You invested so much time and effort into your video ad spec sheet for a reason – you want to perfectly align the UX with your brand and digital presence. And all of those different metrics we mentioned, roughly 20 of them in total, play a role in that alignment. That's why we've made our QA tool customizable to your exact specs.

Whether you exclusively publish high-res ads or cater to different players, our tool lets you configure your settings to your exact needs. Drilling down even further, our tool defaults to the IAB’s recommended specs but in no way limits you to them. 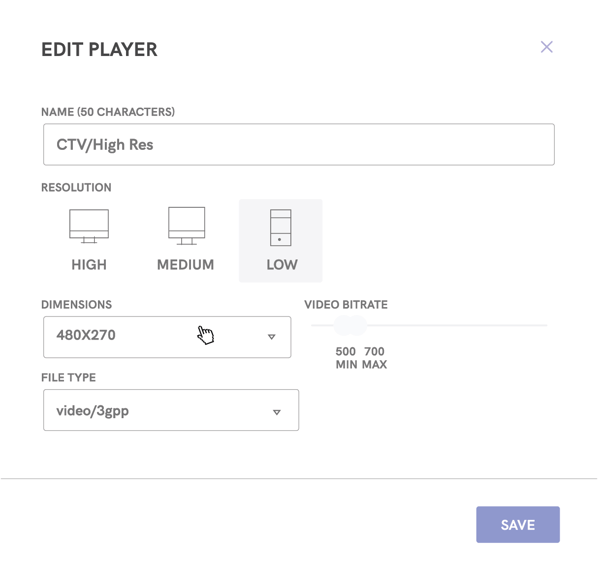 In the example above, the user can adjust the IAB recommended low-res specs for customized bitrates, dimensions, and file types. So if you happen to have a mobile player that only accepts 3gpp files that are 480x270 and play at a narrow bitrate range between 500 and 700, we can tell you exactly which ads are out of compliance and why they don’t fit your spec sheet. Even better, you can customize your settings for multiple players for all of your relevant metrics, including:

When you want a more detailed report on a particular tag, our Video Tag Details page gives you a clear, concise overview of the tag’s performance, where it passed and failed spec compliance, why it failed, as well as other essential information. 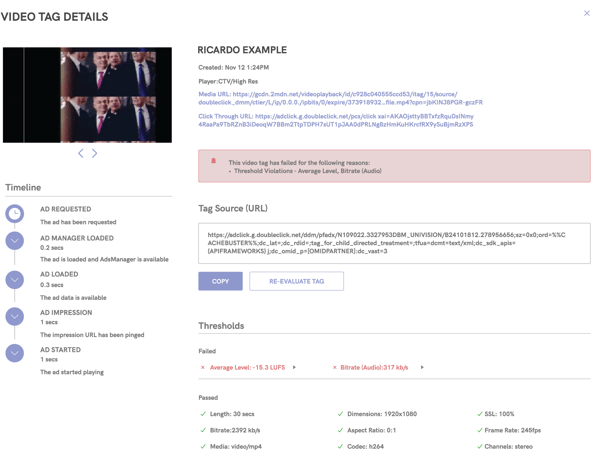 And if there are multiple assets within a tag that you dynamically call for different players, the Video Tag Details page separates all of them to provide complete transparency into what the tag includes, as well as the SSL trackers each one fires. 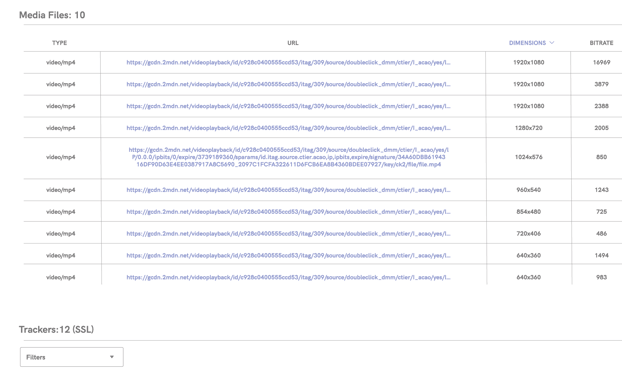 The Next Step: Reporting Issues to the Agency

Granted, understanding the issues in a video ad tag is only the first step, albeit a critical one. The next step is to send those issues to the agency for them to fix. And as most publishers will attest, that’s never been a very neat-and-tidy process.

However, with Ad Lightning’s video QA tool, even that final component is efficient and convenient. Now, you can send batch compliance reports to an agency, providing them with a list of the failed tags and why we flagged them. 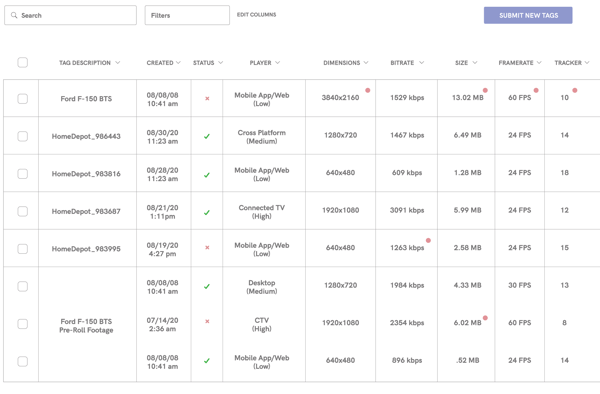 Ultimately, we want to streamline your video QA workflows and help make sure you deliver the best UX each and every time. That’s the kind of thing that creates a competitive advantage that’s tough to beat, driving CPMs and your bottom line along the way. It’s what we do here at Ad Lightning, and we’re about to revolutionize video QA for the digital ad industry.