The entire digital ad industry is sitting at an intersection of some challenging roads right now. Between waning trust from consumers, expanding compliance demands, and the ever-evolving battle against ad fraud, there is a lot to pay attention to and, last time we looked, still only 24 hours in a day. 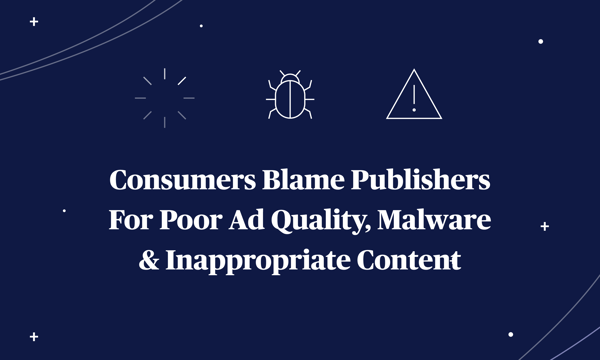 But it’s publishers that are under a particularly harsh spotlight. It’s their digital real estate that displays all of the ads and, fair or not, users ultimately blame them for inappropriate messaging, malicious and infected ads, and many of the other dangers lurking in the ecosystem. Given the potential damage that the different varieties of bad ads can cause – from brand safety and trust issues to lost impressions, CPM, and more – we’re going to take a closer look at the dynamic as well as what digital publishers can do to protect themselves.

Survey Says – It’s All on the Publishers

A recent research report from Adobe, Voices of Generations, revealed several dangerous undercurrents for publishers in today’s digital ad environment. Of particular interest, at least from an ad quality perspective, was the microscope it placed on where the public places blame for bad ads.

As you can see from the graphic, the majority of end-users put most of the blame for bad ad placement squarely on the publisher’s shoulders. Further, this sentiment is consistent across different age groups, meaning it’s not a one-off statistical anomaly belonging to a single generation or demographic.

Now, we’re not trying to say that we necessarily agree with the survey results. However, whether justified or misplaced, it’s the consumers that ultimately drive ad impressions and ad revenue, making their opinion reign supreme above all others. To borrow a popular piece of modern philosophy, it is what it is, and publishers are left dealing with the repercussions of that powerful version of the blame game.

Consumers Have Trust Issues (in Publishers)

As revealing as the Adobe research is, it’s still only a single look at the relationship between the industry and the end-user, albeit it an important one. And if there were no other corroborating pieces of evidence, then we would still take the findings to heart, but with a healthy grain of salt. However, there is plenty of other research that comes to the same conclusion – publishers must take responsibility for the ads that appear on their site.

For instance, another recent survey found that 75% of people believe digital platforms – publishers, in this case – are responsible for the advertising content that appears to the viewer, no matter the legal, political, and regulatory considerations involved. What, exactly, does that mean for publishers? The buck stops with them.

If you’re a publisher and your website loads an ad with a malicious payload, the consumer will most likely blame you, even if the problem originates from an upstream partner. That isn’t to say, however, that the problem is isolated to the publisher level. Due to ad quality issues, privacy concerns, and the many other dangers within the ecosystem, there’s a pervasive lack of trust from consumers that is having a tangible effect on the entire digital advertising industry.

What that essentially means is that the average viewer trusts a billboard they drive past on a highway more than a digital ad appearing on a publisher’s website. And that represents a massive problem for advertisers, publishers, and everyone else in the digital advertising ecosystem.

How Does a Publisher Build Trust?

As foreboding as those statistics might seem, publishers shouldn’t interpret them as an unconquerable dilemma. Yes, there’s an inherent lack of trust in the digital ad industry in general right now. But, given everything that has either directly or indirectly impacted the relationship between viewers and ad industry participants in recent years, can you really blame the consumer for looking at digital ads with a leery eye? After all, as our own research revealed, more than 28% of all ads on the internet are bad at any given moment.

So what is a publisher to do in the face of such powerful challenges? First and foremost, it’s essential to choose the right ad quality partner, one that understands what you’re up against, wants to see you grow and prosper, and offers the ad quality technology you need to fend off the fraudsters.

Aside from tightening up their own operations against bad actors, publishers must also demand that their upstream partners do the same. Granted, something like turning off an SSP isn’t an ideal solution for anyone involved. However, when revenue streams start drying up, even the most hard-headed partners are bound to take notice. Because if they don’t, they’ll cease to exist at some point not too far down the road.

Like it or not, publishers bear the brunt of the ecosystem’s woes. And since the programmatic world isn’t about to disappear or even become less complex in the near future, publishers must take the proper steps to ensure viewability and a satisfying UX. That’s why Ad Lightning places so much importance on providing best-in-class ad tech solutions for publishers, ad networks, and the rest of the ecosystem – the future of the entire industry depends on keeping the end-user happy. And that’s exactly what we help publishers do.