Over the last several weeks, Ad Monsters has been publishing a series of articles about the state and future of ad quality. It’s an insightful read for publishers and sell-side solution-providers.

In the story’s first installment, titled “Three Pillars of Ad Quality: Beyond Redirects”, the author, Brian LaRue, delves into a gamut of quality issues and suggests ways in which publishers might holistically address both the redirect crisis and the other ad quality threats they’re facing.
Here are a couple of highlights:

Ultimately, it’s best for publishers to consider all of the ad quality issues they’re facing and seek solutions that address the spectrum of threats together as a single category, which leads us to the second installment in the series.

There are several other creative compliance problems that are just as significant but tend to grab fewer headlines than redirects and malware. The second article in the Ad Monsters series takes a closer look at quality compliance beyond redirects and highlights concerns that 28% of programmatic ads are out of compliance with IAB ad quality specifications.

Although the IAB has established very specific guidelines, these five issues continue to threaten publisher brands and revenues at alarming rates.

The size of standard banner ad files should be 200KB or less, according to the IAB, but 41% of ads exceed that size restriction. Some ads are as large as 30 MBs.

The ad delivery and decisioning process adds numerous trackers to each programmatic ad. The higher the number of network requests and tracking scripts, the longer it takes for the ad unit (and surrounding content) to load. The IAB suggests a maximum of 15 network calls for any given ad unit. On average, ads are now burdened with more than 50.

Page delays also occur when an ad demands an unusually high amount of processing power on the user’s CPU in order to properly render. The acceptable processing max is 300 milliseconds, but more than 30% of ads are overly processor-intensive.

In order to meet HTTP/2 – compliance, all components of display ads, including the creative and the trackers, must be SSL compliant in order to appear on those sites. The IAB recommends HTTP/2 adoption as a best practice across the board, but more than half of the network trackers that pile onto programmatic ads aren’t SSL compliant.

Programmatic ad delivery significantly increases the occurrence of ads in unsupported (or undesired) formats, like Flash and auto-play video. These formats create conflicts when they render and further chip away at the user experience.

As the primary digital touch point with consumers, publishers shoulder the burden of addressing ad quality issues. It's become essential for publishers to use tools that reveal the specific quality threats.

Here's an example of how an innocent looking ad contains multiple infractions.

The frequency of ad quality issues is alarming and the problem continues to grow as programmatic becomes more entrenched as the standard approach to transacting and delivering digital advertising. In fact, most of the quality issues are an unintended consequence of the programmatic process.

Ads typically begin their journey with a short list of standard ad requests and tracking tags that are intended to measure basic impressions, clicks and viewability. The ad may also start with a compliance issue, like improper formatting. From there, however, issues become progressively more offensive.

When a user loads a web page in their browser and the call goes out to find the best ad to deliver to that user at that moment, each of the players involved (like SSPs, Ad Exchanges and Networks) adds additional, weighty, trackers and sync requests to the ad as they attempt to match it to the user. In the split second journey from request to delivery, ads can pick up dozens of additional trackers. 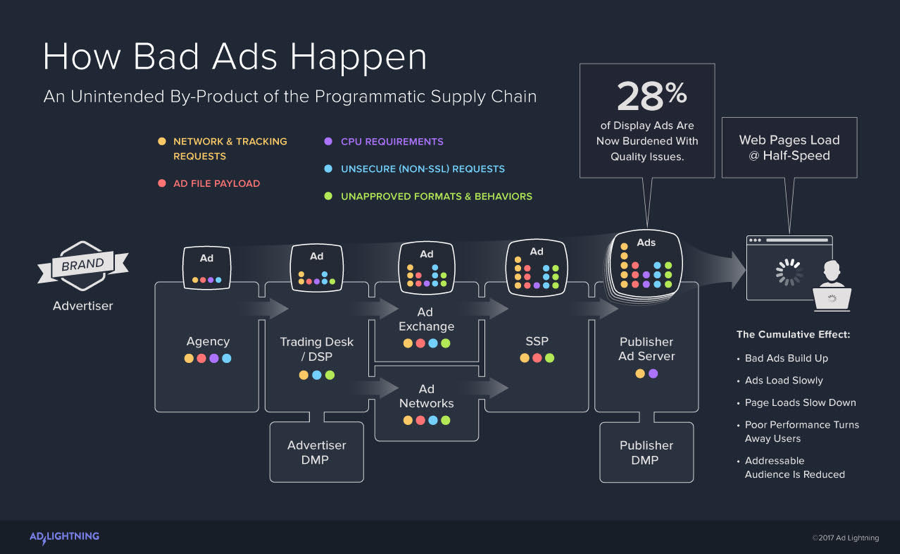 With its LEAN initiative, the IAB is making an effort to get both advertisers and publishers on board with quality standards that will protect and improve user experience. So far, their efforts aren’t enough.
The second Ad Monsters article makes several key points along these lines.

Today publishers bear the full burden of addressing bad ads. In order to make real progress in our programmatically-driven industry, the full range of programmatic players must comply as well. Demand partners need to step up with pre-flight testing, staying updated on threats, and addressing bad ads before they make it further down the pipes. That’s a serious uphill climb. Cleaning up the buy side’s messes shouldn’t be publishers’ responsibility, but as the number one touch-point with users, publishers are forced to pick up the slack.

In 2018, that means turning to publisher-side ad blocking solutions.
The ideal ad blocking solutions are those that help publishers deal with ad quality issues holistically by incorporating multiple strategies for quality assurance into one unified solution. The best publisher-side ad blockers work proactively. They know about the bad ads and current attacks across the ad ecosystem at that moment and provide real-time insights to exchanges and ad platforms.
The third and final installment of the Ad Monsters series on “The Three Pillars of Ad Quality” is due out later this week.