Describing bad ads as a nuisance undersells the scope and severity of the problem. Mosquito bites are a nuisance, bothersome for awhile but usually nothing that time and maybe an over-the-counter lotion can’t fix. No, advertising fraud and bad actors are more like a plague of locusts, devouring revenue, effort, patience, and brand safety across the ecosystem. 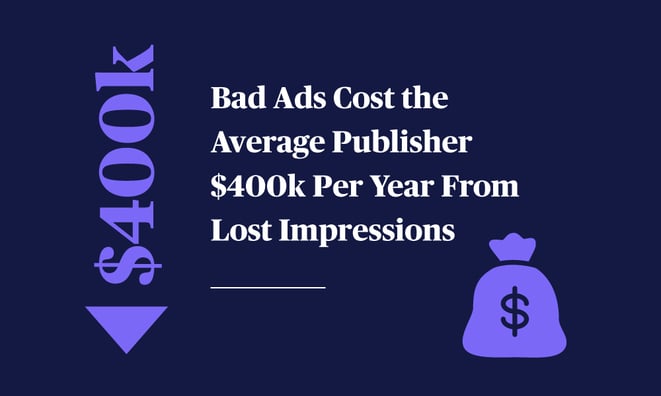 We’ve discussed malicious ads in the past, examining the billion-dollar annual toll they exact on the industry. But even focusing on the performance-related ounce of flesh that bad ads take every year from mid-to-large sized publishers is harrowing – $400,000. And that’s every year.

Obviously, it doesn’t take a tenured economics professor to understand that publishers would love to devote those lost resources elsewhere. In fact, we want to take a closer look at those average losses, explain how we came to that number, and, in the process, put a face on what the industry is fighting. To borrow a well-worn battle cry from the ages – know thyself, know thy enemy.

It’s All About Speed

Publishers want page views. Impressions. The more eyeballs that see a page, the more they can monetize a site. Therefore, speed is a precious commodity, especially as mobile advertising continues its relentless march forward. But speed alone isn’t the only critical factor that drives page views. Publishers also need to provide a compelling, satisfying user experience that isn’t dragged down by latency to truly maximize impressions.

Today, ads are far more lean and mean than just a decade ago, with publishers constantly looking for that CPM Goldilocks zone between ad slots and latency – too many ad slots and the latency drives customers away, but too few and the CPM drops.

That’s the premise for our annual loss calculation – ad quality issues increase page load speeds, and that impacts the abandon rate. Naturally, every abandoned page view is an ad impression that disappears into the digital ether, robbing a publisher of revenue. So to zoom in on our calculation a bit more, we made the following assumptions: 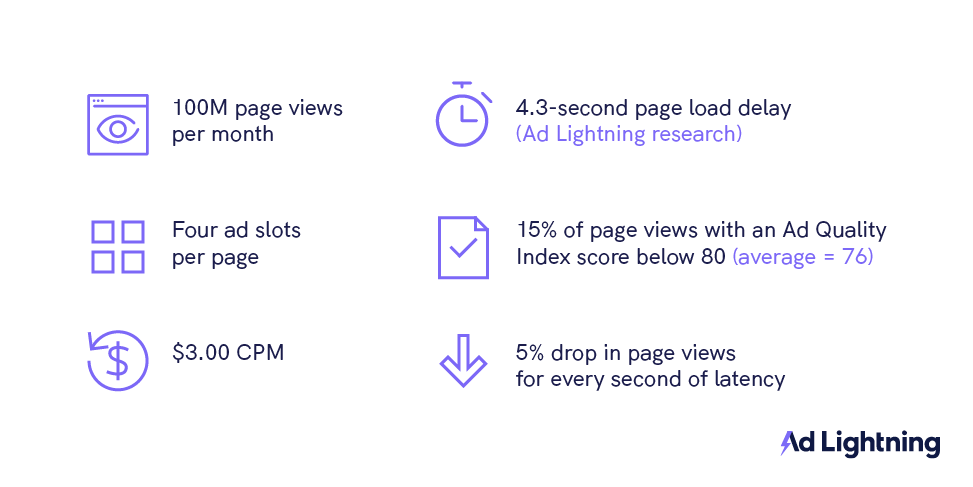 We should note that the 5% latency-driven reduction in page views used in the calculation is actually a very conservative estimate. In reality, research shows that every second of latency equates to an 11% drop in page views.

Based on both research and our very reasonable assumptions, publishers lose an average of $33,000 per month from ad-related page load latency, projecting to roughly $400,000 per year. No matter how you look at them, those are staggering losses, and that’s only looking at the latency-driven side of ad quality issues.

As the industry has veered more toward programmatic, CPM has consistently dropped, meaning every impression counts. Sure, publishers have tried to bolster revenue through subscription models and other avenues, but to limited success. Digital advertising is still a publisher’s proverbial bread and butter, and that won’t change any time soon.

Ad quality’s impact on the bigger monetization is even more humbling. As we said, that $400,000 figure only accounts for latency issues in one section of the supply chain. If you were to include losses from malware, higher labor costs due to expanded ad ops teams, or even the financial impact of regulations like GDPR and CCPA, that monthly loss total would be significantly higher.

Perhaps the most sobering aspect to these ad quality issues is the opportunity costs involved, though. Every minute and dollar spent on battling bad ads is a minute and dollar that could have gone to strategic revenue initiatives, testing new partners, and optimizing campaigns. Unfortunately, there are only so many minutes and dollars to go around.

That’s why we recently published our 2020 Guide To Blocking Bad Ads & Ensuring Ad Quality – to give publishers and platforms tired of ad fraud a much needed blueprint on flipping the ad quality script. Like it or not, one thing is for certain – growth in programmatic ad spend isn’t going to slow its pace, so neither are bad ads and fraudsters. But if the industry takes smart, and informed action, chooses the right solutions, and works together, the good guys can win this fight against ad fraud.